It a really really long way from the Eastern to the Western Arctic. Via scheduled commercial routes, it would take me over three days of plane flights in a row to get from my one field site to the other this summer – I will not be trying it all in one go. Two days and over 14 hours of flying over six legs… and I am only as far north as the town of Resolute – still a stop away from the final three-hour charter flight out to Alexandra Fjord on Ellesmere Island. This must be the farthest I have ever traveled only just making it out of one time zone, pretty much straight north from Ottawa to Resolute.

It is a long way to come for this field season in the Eastern Canadian Arctic. After the different parts of Team Shrub briefly united and then parted again in Vancouver, we are now separated by over a thousand kilometers on either site of the Canadian Arctic. PhD student Jakob, stayed back in Europe the far, far north of Europe and has just landed on Svalbard! So, why divide forces this year to send drone and plant research teams to three different parts of the Arctic – Qikiqtaruk – Herschel Island in the Yukon, Alexandra Fjord on Ellesmere Island, Nunavut and Svalbard in Norway?

This year on Team Shrub, we’re working to capture a biome-wide perspective on the question of what is causing the tundra greening as seen from satellites and how representative our long-term monitoring records are of vegetation change across the landscape as a whole. In addition to trying to unpick this biome-wide perspective on tundra greening, we want to understand the tundra browning side of the question too, and are continuing to capture the rates of permafrost thaw and coastal erosion. Here, on Team Ellesmere, my colleague Jeff Kerby from Dartmouth College and I are headed out to join the research group of Greg Henry from the University of British Columbia at Greg’s long-term ecological research site informally known as ‘Alex’. So, that’s why we’re headed – northeast (though west from Scotland still!) to the Eastern Canadian Arctic.

Funded by the NERC UK-Canada Arctic Bursary Programme, the Royal Geographical Society, some gear from Jeff’s last National Geographic Society grant and with support from the Polar Continental Shelf Program, we’re equipped with three multicopter platforms and two fixed-wing platforms for each of the Yukon and Ellesmere Teams and a new thermal camera and RedEdge sensor from Micasense that literally arrived at the very last minute! Thanks to Emily at Micasense, Sandy from the UBC Geography Department and Cassandra for getting us that last piece of equipment! We are now poised to take off with our drones and capture the landscape perspective on tundra responses to climate change. That is if our drones aren’t too concerned about being this far North and much closer to the magnetic North Pole.

Being in a new part of the Arctic is a bit of a strange feeling. To feel somewhat at home in a place that I have never been to before, but also to feel the culture shock of a superficially similar, yet actually quite different environment to the places that I have been going each summer for fieldwork for the past decade or so. As I airport-hop up from Ottawa to Resolute via Iqaluit, Hall Beach, Pond Inlet and Arctic Bay here are a few of the similarities and differences that stand out.

Here, in the Eastern Canadian Arctic, the airports look much the same. The commercial airline companies are different; First Air instead of Air North, but the charter company is still the familiar black and red twin otters of Ken Borek – here there is no subsidiary of Aklak Air though. One surprise for me is the 3G connectivity in the different Arctic communities – we could check up on the World Cup scores as we head North! Sad loss for England though.

There is Inuktitut spoken all around, which is both so similar in sound and somewhat different to Inuvialuktun, the language of the Western Arctic. To illustrate the similarities, umingmak versus umingmuk are the words for Muskox in the two languages for example. The villages have a similar feel and people are really friendly, but the views out the plane window are surprisingly different.

The glacial history of the Eastern Arctic is unmistakable even to the eyes of an ecologist! Large striations and scrapes of the ice sheet are still visible everywhere you look. There are exposed and weather beaten hills and dramatic carved out fjords. Here, even though it is the second week of July, there are snow patches on land and sea ice in the water, and with white clouds above – the color pallet is more white and brown than green like out West.

There is no majestic Mackenzie River, no flat Yukon North Slope stretching as far as the eye can see and no trees dotting the landscape like just north of Inuvik. Here, the tundra vegetation appears more barren, eking out an existence on the exposed and windblown slopes. But, I have already seen some happy looking Salix arctic – the circumArctic willow species – and yellow Arctic poppy flowers blowing in the breeze, which makes me feel right at home!

Papaver radicatum (arctic poppy) – always a standout across the tundra landscape with its bright yellow colour. 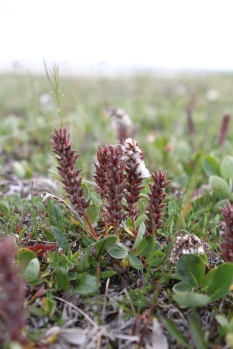 Salix arctica (arctic willow) dispersing seeds on Qikiqtaruk. This ground-hugging shrub is found across much of the tundra biome.

During our (hopefully) only full day of logistics here in Resolute, we unpacked and packed our bags, roamed the loading bay finding research equipment from days of yore. Last summer in 2017, Jeff was headed on an epic nine-day trip from Qikiqtaruk all the way to the Yamal peninsula in Siberia to collaborate with polymath of the North, Bruce Forbes. This year we blew off the thick layer of dust on boxes of field equipment belonging to the very same Arctic researcher from many moons ago.

Tomorrow morning first thing, if the weather cooperates, we are heading on a 2.5-hour flight north and east off to Alexandra Fjord and out of internet connectivity. On the very same day on the other side of the Canadian Arctic, Team Qikiqtaruk will be flying off from Inuvik to the island. And, Jakob is already up there at 78 degrees North on Svalbard. Three sites, seven field researchers, 16 drones will hopefully turn into terabytes of data to help us understand what is going on as tundra ecosystems warm.

From west to east, the legacy of Pleistocene ice scrapes a green to brown palette, colors that dominate this year’s collaborative research efforts. From one Arctic field site in 2016, to two in 2017 and now in 2018 three! Team Shrub is expanding, just like the tundra shrubs. And we are just a part of the picture. After this summer, we will be able to scale up our ecological findings to sites across the tundra biome using data from the 20 sites spanning 7 Arctic nations of the High Latitude Drone Ecology Network. But first we all need to get out to our research sites!

By Isla and Jeff

To understand how the Arctic is responding as the climate warms rapidly, we need tech to collect data across scales - using boots on the ground, drones and satellites.
What happens when your fieldwork is off because of a global pandemic? You adapt your plans. In our latest Team Shrub blog post, we share the story of our remote field season and fill you in on our research findings so far.
“The overall Arctic greening signal provided by #satellites is unmistakable, but are plants growing bigger? Are different plants encroaching? Are changes homogeneous?” With drones, we're finding out the answers. Check out the paper in Environmental Research Letters and article in the EOS magazine from the @americangeophysicalunion.
Science is always a journey. And the publication of a paper is a pinnacle of one part of that scientific journey for us as scientists. We found that for plants and animals, biodiversity change is amplified by forest loss at sites across the planet. Hopefully our findings will stimulate further research, improve projections of the impacts of global change on biodiversity and contribute to conservation efforts. So in a way the publishing of this paper is also the beginning of a larger journey for the findings themselves.
Loading Comments...
%d bloggers like this: