In the Arctic, life focuses around the daily routine – meals, fieldwork, what to pack in your bag – warm clothes, snacks, drone equipment, etc. And what sets that daily routine is the weather, wildlife and the Earth’s elements in all forms. What does it matter when the work day starts if it is windy and raining and you can’t do the work you need to do. But equally if the sunshine and light winds come at any time, morning, noon and night, you need to be ready to get out there! For the last four days, the weather has been holding us back.

Update Monday 8:20 AM, 13th August 2018: Today, we are here on Qikiqtaruk – Herschel Island – on the day we were meant to fly out of the island and back to that supposed “real world”. Low clouds have been whipping past the island and there has been some drizzle. Not the ideal conditions for a plane flight. Our bags are packed and we are mostly ready to go, but we are on hold waiting for the weather and for the next available slot for the charter plane to pick us up, supposedly tomorrow at 5pm.

We had an epic day of data collection out at Slump D to get high resolution 3D models of the thawing slump with an added bonus of thermal data collected with a FLIR Duo R sensor – images of the temperature of the surface to help us understand how slumps thaw. That took us a good six hours of flying with two drone teams and two drone platforms – a Phantom 4 Advanced multicopter and an FX-61 Delta fixedwing. Surprisingly, the weather did not deteriorate that day as it often does when you head out in the boat to go to the farther away sites and we managed to get all the data collected.

A thermal image of Slump D.

Taking a drone selfie to check that the camera is working.

Here are some of those very data. On the top left you can see the same part of Slump D in mid July and early August. The slump head wall has thawed a bit and the snow patches are smaller. Below you can see this same bit of slump in the four spectral bands of the Parrot Sequoia sensor – red, green, red edge and infrared. Different features of the tundra landscape are visible across these spectral bands – this is the information that we will extract to understand how rapidly these systems are thawing.

The cravas at Slump D in July with snow patches. 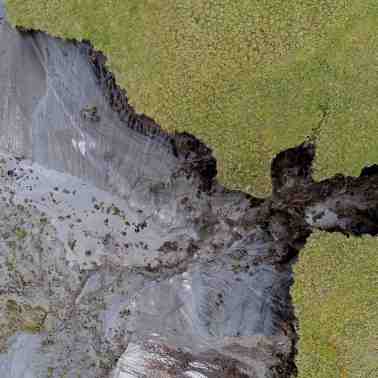 The cravas at Slump D in August with smaller snow patches. 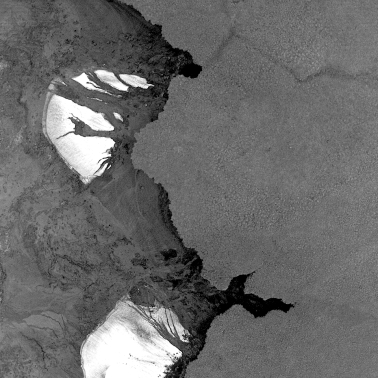 The last few days of the field season were not as epic. Team “Resting Drone” as we now call ourselves attempted to collect the last of our multispectral drone data. We hiked out to one of our focal research sites Collinson Head (Nuvuruaq) with all of our drone equipment – three drones and very heavy bags full of batteries and warm clothes. And then we spent all day out on the tundra waiting – on the first day for the winds to die down, and on the second day in the still calm winds for the fog to blow away.

Sadly, the weather did not cooperate and no drone data were collected. With periodic storms coming in the month of August, that was our last window for drone flying and without the stars aligning, the end of season multispectral data could not be collected. Sigh!!! At least there were some multispec data from the 3rd of August, which wasn’t that long ago. Sometimes it is hard to come to terms with the elements dictating which data get collected and when. All I wanted was one more day of late season drone data out at Collinson Head, our long-term monitoring site where we track the seasonal changes in the vegetation, but it was not to be.

Update Tuesday 8:20 AM, 14th August 2018: Every morning we call in to provide a weather check for the pilots at Aklak Airlines. As I said in my sat phone call, now it is very windy with up to 50+ km/hr gusts of winds from the west to northwest. The ceiling height is variable with some low cloud around at 400 ft. Again, not ideal for the plane. Maybe the twin otter will be able to get us this evening?

It isn’t too windy to go collect markers though, so we head out across the tundra to deconstruct the remaining drone plots that we optimistically left in place in case we could fly the drones. It is beautiful out there with the tundra just starting to turn from green to golden brown. It is a late year for plant phenology – the timing of the greening, flowering and yellowing of the plants. In 2018, the plants greened up about two to three weeks later than in recent years, back to the timing of the growing season from the late 90s and early 2000s. This year has been a cold year across the Canadian Arctic. Having that variation in when the plants are growing from year to year will help us understand and quantify how plants might respond as the Arctic continues to warm.

Can you spot the differences in these photos from the same places on the same date, the 25th of July, in 2017 versus 2018? 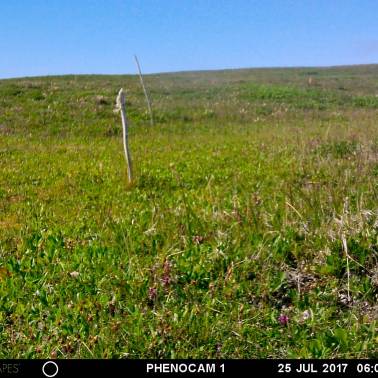 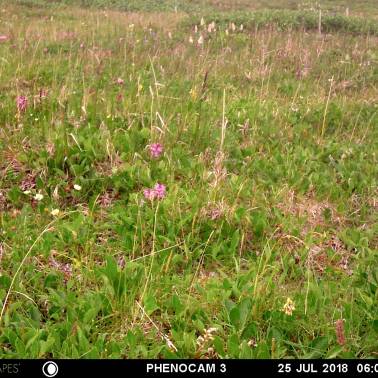 The differences might appear subtle, but in 2018, there are still lots of flowers visible at both sites and there is maybe less of a brown hue to the tundra leaves in 2018 relative to 2017.

Update Tuesday 4:00 PM, 14th August 2018: The weather has improved! But unfortunately, the pilots are stuck in Cambridge Bay in the Central Arctic. No flight for us today. Maybe first thing tomorrow. Time for a very long call on the sat phone to reschedule our flights, but worry not Air North, Yukon’s Airline is the best airline ever! We get our ticket changes all sorted.

The other thing that makes the Arctic just as real as the rest of our lives are the people. When you are on a remote Arctic island, your family and friends feel very far away, but equally you have a new community right there with you – the people on the island. Local people, “research neighbours”, park rangers, government workers, tourists – all the islanders join together to become a part of the overall experience that is far more interactive than many of the relationships we form in our modern lives. These are the people you eat with, chat with, share a wildlife sighting with, see every day and who share in the same daily routine set by nature’s elements.

The wind has died down, we can fly drones again – but we only have one evening left and the drone gear is all packed. So, we go for the final coastal erosion flight that we were also hoping to collect as those data can be collected in the evening and don’t involve too much unpacking. The sun comes out and low angle golden light bathes Simpson Point (Kuvluraq) and Pauline Cove (Ilutaq) and the flood plain. When the Arctic is this epically beautiful, I am even less keen to leave!!! We collect the data and have time for a final sauna and dip in the Arctic Ocean in addition to finishing all of the final packing. Will we be off tomorrow? Only time will tell.

Update Wednesday 8:20 AM, 15th August 2018: The skies are clear over the mountains and towards Inuvik. The ceiling height above the island is at least 1000 ft. The winds have died down and the seas are calm. There is no fog. Great conditions for a plane fight – and for flying drones, but the drones will have to wait for next year because the plane is on its way in less than two hours. Time to do/re-do the final packing, cleaning and to lug our bags out to the runway.

In the distance along the strip, we see one of the male muskox ambling along and when we look closer with him we see the fox. It looks like the fox is teasing the muskox, jumping around near its ankles. If only we didn’t have to pack and get our stuff to the airstrip, we could watch this wildlife encounter unfold properly. Instead we have to try to encourage that muskox to leave the strip before the plane comes!

Update Wednesday, 10:20 AM, 15th August 2018: The twin has landed. We load the plane and say our final goodbyes to the assembled island community. We take a last group photo and get on to the plane to take off and head back to the not-quite-so-real world away from the Arctic.

Where does a journey begin? For Team Shrub this summer, maybe the journey begins here on the shores of Kluane Lake in the Mountains of the Southern Yukon.
Meet this year’s Team Shrub!
Summer is coming and Team Shrub is back to the Arctic!
To understand how the Arctic is responding as the climate warms rapidly, we need tech to collect data across scales - using boots on the ground, drones and satellites.
Loading Comments...
%d bloggers like this: