Over the last five years, the common garden in Kluane has allowed us to collect data on the growth of different willow species from across Canada. This experiment enables us to better understand how plants grow in a warmer climate. Over the start of this summer, which has been particularly hot in Kluane, we have continued smothering our plants with love by fertilizing and watering them so they would allow us to take all sorts of measurements on them – including phenology, new growth, leaf length and canopy height.

A majestic setting for our shrubs to grow in! 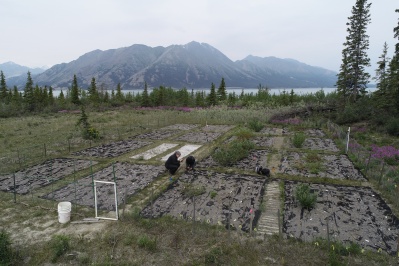 Measuring leaves in the dusty garden

Here we have “Izzy Rich”, the garden bed named after our 2017 field assistant Izzy!

At the moment, one Salix richardsonii individual is the tallest plant in the garden at 156 cm, which makes it the king or queen of the (Arctic) jungle! We will be back in August though so there is still time for other plants to have a go at dethroning it. A close-up view of our willows is spectacular, but I have to say that looking up every once in a while from callipers and measuring tapes and seeing the majestic mountains surrounding Kluane lake does not get old – this is truly is a magical place.

Behind our experiment at the shores of Kluane Lake rise the mountains that gives us a chance to step, in just a few hours, into the tundra. Aside from the abundance of shrubs, grasses and beautiful alpine flowers that are our primary attraction to these climes, we have also over the last few years been helping Anna Hargreaves to examine patterns of herbivory. Laying out seeds and cages, we keep an eye out for critters and flutters, picking and scratching, and most often of all, the scraping of teeth and piles of poo that signify a small mammal has found our caches. This year we have added fake caterpillars to expand the repertoire of munching mementos. All went well with putting out the seeds, though it turned out the fake caterpillars were hard to work with in the summer heat! But we managed. Either way, the birds didn’t seem overly keen – only one, maybe three, caterpillars got pecked. Whatever the task, it hardly matters once atop the mountains: the views are reliably beautiful!

To find out more:

A successful climb up the mountain! 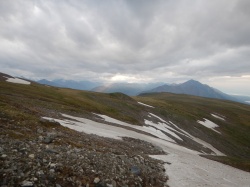 Beautiful views along our elevational gradient

By Gergana (and Haydn)

Drones! We still have them, none have broken yet. The main task of our test flights while in Kluane was adding the Sequoia multi-spec sensor to the DJI Phantom 4 Pro (editor’s note: for non-drone folks I think that means ‘added a cool camera to a mini helicopter’). The flights were a success with slight glitches that have been corrected by now. The only casualty during our flight operations were my ankles which were not properly protected from the mosquitoes during the first flight at dusk. If anything it was a proper introduction to the bugs that we’ll face while on Qikiqtaruk-Herschel Island. Once all flights were completed, we carried five gallon buckets from the lake to water the community garden through herds of black flies.

Yes, I was sore the next morning.

Exploring – from the ground to the sky!

In between measuring leaves, counting seeds and flying drones, we also got to explore the icefields near Kluane – a magical experience! Our favourites included the super high mountains, the rich turquoise colour of the little pools among the ice, and just the all around grandeur of the place. Majestical, as the movie Hunt for the Wilderpeople would put it.

Sophie and Mariana on the icefields

We all loved the deep shades of turquoise!

We continued the Team Shrub tradition of a barefoot icefield run – refreshingly brisque! It was quite the contrast to feel the heat of the sun and the chill of the ice at the same time.

The cool plane that got us to the icefields@

We are now off to Qikiqtaruk-Herschel Island for the next, longer stretch of our field season! In less than two hours, us and many boxes are scheduled to depart for Qikiqtaruk. Oh the adventure that lies ahead…we can’t wait!

By Gergana, Mariana and Noah

One thought on “From the ground to the sky: fieldwork in Kluane”