As we prepare for the upcoming field season, the end of my first PhD year looms closely on the horizon. It then seems like a good moment to recap what has been happening during this intense year and to test whether my elevator pitches have improved since I was first overwhelmed to describe my thesis!

My PhD project has turned out to be a bit unconventional, to say the least. I have always been a fan of the big picture and global issues, so when I decided to do a PhD, it was clear that I would be fully embracing macroecology and biogeography topics. The preliminary title of my thesis (because this is perpetually changing) is ‘Quantifying vegetation shifts under climate change in extreme biomes’. What this means is that I am carrying out a comparison of plant responses in two extreme biomes: the tundra and the savannah, both extensively distributed biomes across the planet. You are probably shaking your head and thinking “but… why?”, which is a perfectly normal first reaction and a question that I have been asked lots over the past year.

Let me explain a bit. As you know, the tundra is found at very cold temperatures with low precipitation, while the savannah is found at high temperatures but with a wider range of rainfall conditions. However, both biomes are characterised by a strong seasonality (i.e. summer is the growing season in the tundra, while the savannah is characterised by a dry and a rainy season). Something else that these two have in common is the fact that they are structurally very similar. Both are characterised by an open landscape dominated by mainly grasses and shrubs, with trees too in the case of the savannah. Their ecological structure and functional groups are very similar, with some authors even referring to the tundra the ‘cold savannah’. If you look at the photos below, can you identify which biome is which? 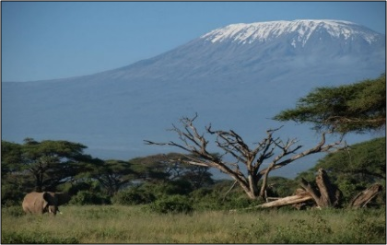 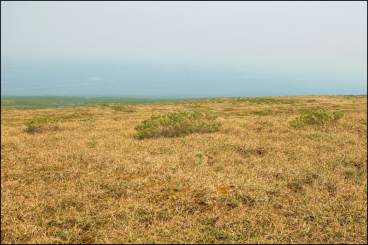 Hint – no trees is usually a good sign that you are in the tundra and not in the savannah. Elephants could potentially be a helpful indicator too though.

These similarities mean that the tundra and the savannah have been undergoing similar changes under current climatic conditions. The most conspicuous process so far is woody expansion or encroachment (a.k.a. shrubification), where trees and shrubs expand into open areas. Shrubification has been reported widely over the last decades in grasslands across the globe. However, the fact that the tundra and the savannah are found in extreme climatic conditions, which are bound to continue shifting under climate change, means that they could be particularly at risk.

While this is good news for shrubs, which are happily conquering new lands, this comes at the cost of other species, such as lichens and mosses, which end up being outcompeted. Wide scale ecosystem changes like this can also affect the carbon cycle and nutrient exchange, and ultimately, the persistence of these biomes at local scales. The tundra can lose ground to in favour of the boreal forest following warming temperatures, while parts of the savannah can be converted to tropical forest or agricultural lands due to herbivory influence and shifts in wildfire regimes.

The tundra and the savannah are pivotal in supporting biodiversity and providing ecosystem services. For this reason, we need to understand if they are responding in a similar manner to climate change or if their behaviours are highly specific – this will enable us to better predict and act in the face of global change. These rates of change rates are yet to be quantified, so here is where I come in! This is what I have been working on for the past year and hope to have some outcomes soon. Stay tuned for some (hopefully interesting) results in the near future!

One thought on “Keeping up with biomes”

To understand how the Arctic is responding as the climate warms rapidly, we need tech to collect data across scales - using boots on the ground, drones and satellites.
What happens when your fieldwork is off because of a global pandemic? You adapt your plans. In our latest Team Shrub blog post, we share the story of our remote field season and fill you in on our research findings so far.
“The overall Arctic greening signal provided by #satellites is unmistakable, but are plants growing bigger? Are different plants encroaching? Are changes homogeneous?” With drones, we're finding out the answers. Check out the paper in Environmental Research Letters and article in the EOS magazine from the @americangeophysicalunion.
Science is always a journey. And the publication of a paper is a pinnacle of one part of that scientific journey for us as scientists. We found that for plants and animals, biodiversity change is amplified by forest loss at sites across the planet. Hopefully our findings will stimulate further research, improve projections of the impacts of global change on biodiversity and contribute to conservation efforts. So in a way the publishing of this paper is also the beginning of a larger journey for the findings themselves.
Loading Comments...
%d bloggers like this: