From secrets through rumours to facts – science in a nutshell!

Our team recently attended two big conferences – Ecology Across Borders (check out our highlights so far) and ArcticNet (you can read our round-ups of day 1, day 2, day 3 and days 4 and 5). Thousands of scientists coming together to share their findings and ponder new directions. Despite the ocean between us, it still feels like we are going through the conferences together – the magic of emails, blog posts and twitter! Sometimes it helps with my fear of missing out, sometimes it makes it worse.

Weather-wise, it’s not that much different thanks to the snow storm in Belgium, though it is colder in Quebec, and I imagine Canada knows how to deal with snow! Conference-wise, it feels like there are many ubiquitous aspects – the big rooms, full up to the brim with scientists, the slight madness of poster sessions, the snacks that get eaten by the time you find out they’ve appeared.

At the Science Comedy Slam, part of the Ecology Across Borders conference in Belgium, Yvonne Buckley told us about her love of seeds, of which she has weighted many (thousands!), and what the process felt like. I loved her description of the scientific process – we go from secrets, the exciting unknown, to the rumours, our findings that we tentative believe in, but things are not quite clear yet, to the facts, the statements we’ve backed up with strong evidence.

Now that both Team EAB and Team ArcticNet have wrapped up their respective conference experience, we’d like to share some of our favourite secrets, rumours and facts.

Rumours. The hypotheses, the first results coming in.

But really, the line between rumours and facts in science is often blurry – and facts might not always stay facts, as new evidence continues to come in. That might even bring us back to the secrets, but what ecologist doesn’t love a good secret or rumour. 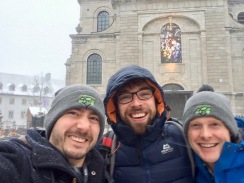 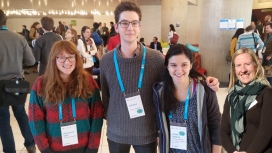 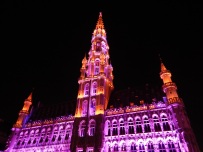 By Gergana, Haydn and Isla

One thought on “Secrets, rumours and facts from two parallel conferences”

To understand how the Arctic is responding as the climate warms rapidly, we need tech to collect data across scales - using boots on the ground, drones and satellites.
What happens when your fieldwork is off because of a global pandemic? You adapt your plans. In our latest Team Shrub blog post, we share the story of our remote field season and fill you in on our research findings so far.
“The overall Arctic greening signal provided by #satellites is unmistakable, but are plants growing bigger? Are different plants encroaching? Are changes homogeneous?” With drones, we're finding out the answers. Check out the paper in Environmental Research Letters and article in the EOS magazine from the @americangeophysicalunion.
Science is always a journey. And the publication of a paper is a pinnacle of one part of that scientific journey for us as scientists. We found that for plants and animals, biodiversity change is amplified by forest loss at sites across the planet. Hopefully our findings will stimulate further research, improve projections of the impacts of global change on biodiversity and contribute to conservation efforts. So in a way the publishing of this paper is also the beginning of a larger journey for the findings themselves.
Loading Comments...
Comment
×
<span>%d</span> bloggers like this: