Autumn has arrived in Edinburgh – leaves are turning bright colours, students are returning to the campus, some chapters have ended, whilst others have only just began. It’ll be an exciting year for Team Shrub as new students join in and we put our curiosity and love for science into practice.

Team Shrub welcomes two new PhD students! After a field season in Northern Scotland and a field season in the Arctic, Gergana is back in Edinburgh to delve into the world of biodiversity change and its drivers. Her project aims to quantify the effects of land use change on global and local patterns of species richness, abundance and composition, and develop a computational framework to facilitate answering ecological questions using big data and global synthesis of long-term observations. In particular, she will investigate whether: 1) changes in species richness, abundance and composition can be attributed to land use change over recent decades, 2) land intensification and land abandonment are both causing species homogenisation, and 3) biodiversity change processes are more pronounced in areas of high land use change rates.

Mariana comes to us after spending almost four years working in Brussels at the International Union for Conservation of Nature (IUCN), where she worked on different biodiversity conservation-related projects, with her main focus being the assessment of species’ extinction risk as part of the IUCN Red List of Threatened Species. With her PhD project she aims to inform conservation action through science, specifically by modelling how plant species distributions will shift under climate change at two extreme biomes – the tundra and the savannah. In addition, she will research which traits make species more susceptible to population change and extinction, and whether the responses to climate change are generalizable or biome-specific.

Claudia spent her summer in the Peruvian mountains studying plant traits, which inspired her to think about how biodiversity and species traits vary not just across latitudes, but also with different altitudes. It’s very cool to see how species change from tropical to more Mediterranean-looking to tundra-type ones! Snow in the tropics is not something we often imagine, or see! Claudia will aim to answer the research question: “How do traits and biodiversity change across altitude in the tropics and in the Arctic tundra?”

Matt had an exciting summer being a field assistant first in Honduras, and then in Kluane.  He collected data on bird species along elevation gradients in both regions, and will be investigating how feeding guilds vary across the tundra and rainforest, and along the elevation gradients.

In his honours project, Sam will focus on quantifying the above-ground carbon stored in Arctic ecosystems, in particular on Qikiqtaruk-Herschel Island Territorial Park. Over the summer, we collected biomass samples for Sam from several different species, we dried them over the fire in the Community House, and now that we are back in Edinburgh, Sam can start with his carbon and nitrogen analyses!

We have also led the first Coding Club workshop – exciting to see Coding Club back for a second year of coding and statistics inspiration and knowledge sharing! With Coding Club, we want to create a friendly environment in which we can learn about quantitative analysis together. Coding Club is for everyone – all students and staff are welcome to come along and participate, regardless of their current R knowledge. We were thrilled to see people returning to our workshops, as well as many new faces – with new students come new ideas, new research projects and new data presents to open. Ah, imagine the graphs!

Coding Club will soon celebrate its first birthday – in one year there have been many lines of code, the majority of them working, plus many workshops, posters and emails to spread the word. Every week there is a little pocket of R magic in our university building, though with over 50 people coming to our two workshops last week, the pocket doesn’t feel so little anymore! We have ambitious plans for developing Coding Club further, sharing what we have learned so far, and forming new collaborations. You can check out our tutorials on efficient data manipulation, data visualisation, mixed effects models and more on the Coding Club website. We are also very happy to have other people use our tutorials to deliver Coding Club workshops around the world, and would also love to have more people contribute online tutorials. If you are interested, you can get in touch with us at ourcodingclub (at) gmail.com.

A particularly great aspect of Coding Club’s first week back was that the workshops were lead by Sam and Claudia – two of Team Shrub’s new honours students. We hope to spread inspiration and motivation to learn through our workshops, and we were definitely inspired by Sam and Claudia’s great work! Coding can be scary and intimidating, but among the occasional fear and many R errors, we are glad that there is a place where we can brave the errors together and get better at finding the answers to our research questions. 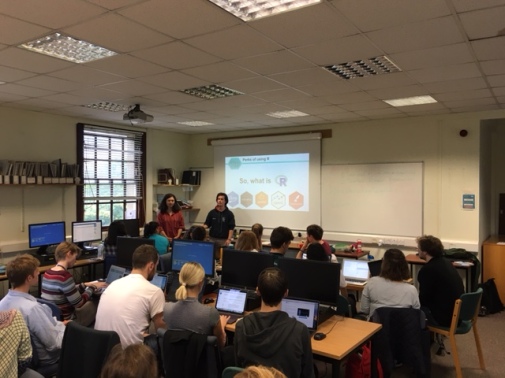 Sam and Claudia leading Coding Club in front of a room packed with people keen to learn R! https://ourcodingclub.github.io/

Working away on quantifying biodiversity in Edinburgh and learning how to use R and RStudio in the meantime.

Isla with the best cookie of them all – the effect size cookie! Have you reported effect sizes in your latest manuscript??

And so begins a new chapter and a new year here at Edinburgh. We’re excited about what’s in store and looking forward to sharing our successes, setbacks, and many many shrubs with you over the next year. 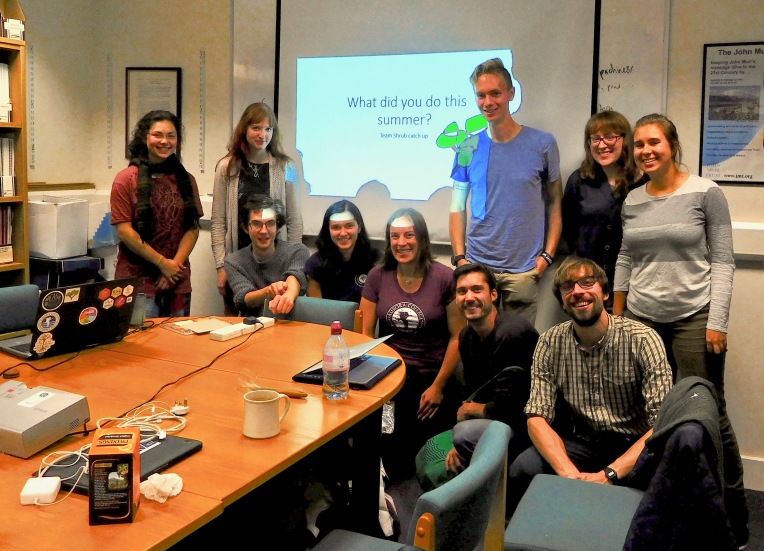 One thought on “The start of a new chapter (or many)”