Edward McLeod is a park ranger on Qikiqtaruk – Herschel Island from Aklavik, NWT.  Here he shares his perspectives on working as a park ranger and the collaboration between the rangers and researchers here on the island.

Working on the land

I started working as a Yukon Parks ranger on Qikiqtaruk – Herschel Island Territorial Park in 2008, so I guess next year I will have been on the island for 10 years. I always wanted a job out on the land, working outside, and I love being here. When I was younger, I used to spend my entire summers out in the bush – I love the bush life. I came to Qikiqtaruk and Shingle Point many times as a kid – I grew up here, and it was wonderful to be able to play around on the coast and see all the animals, as well as learn about hunting and fishing. I saw what was probably the first cruise ship coming to Qikiqtaruk.

I remember there used to be more ground than there is now – coastal erosion has taken away big chunks of land, and beaches have appeared and disappeared through the years. Travelling the coast has always been a significant part of my life, and a key element of travelling is being able to adapt to change. There would be three-four boats travelling together, and sometimes we would get stuck in places for weeks – we have to make sure we have enough food, and know how to use landmarks to navigate once it is safe to move on. I’ve always heard you used to be able to predict the weather by looking at the clouds, but nowadays it changes so quickly, we always have to be prepared for everything. But, I’ve never gotten really lost on Qikiqtaruk, or in the Mackenzie Delta, I know these places like the back of my hand. Still, once I got caught in a storm and I had to sleep outside between my snowmobile and toboggan, with everything I carried wrapped in a tarp. It was a good thing I had a cozy muskox hind to sleep on to keep me warm. Before I made the shelter, I was going in circles for hours, and thankfully I was carrying a spot device, so my brother and two uncles noticed I was going in circles, and came and brought me back home to Aklavik before the storm got worse.

To be a ranger, you need traditional bush skills – hauling water and wood, making a fire, travelling with a snowmobile. If something goes wrong, you have to know how to take care of it without much help from the outside world. Having an education is also important, as we keep records including a daily journal, wildlife records and fill in data collection sheets for the Ecological Monitoring Programme. A good sense of humour is also key, especially when you spend such a big portion of your time with just one other person – the other ranger with whom you share your shift. We have to make our own life here on the island – you have to be easy going and go with what life throws at you. 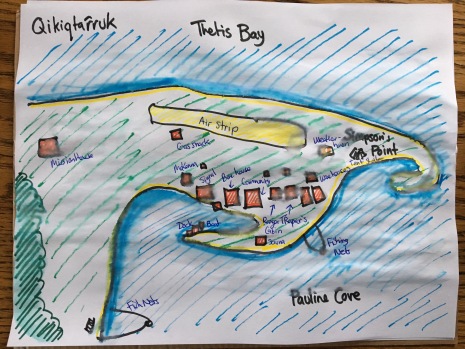 A map of the island to record the Bird and Plant Bingo sightings on!

Bird and plant (and more) bingo – a fun way to learn about the island’s wildlife!

During the winter months, I teach traditional bush skills in my community and beyond. There’s the Elders and Youth Programme as well, but it’s not enough for people simply to know about these opportunities – they have to take them up. My daughter is gaining bush skills, and I hope she keeps developing them. It’s important that youth are taught traditional bush skills.  Perhaps my daughter will follow in my footsteps and be a ranger out here on the island one day herself!

I was excited to find out that ecological monitoring is part of my job as a ranger, and to learn more about the plants and animals on Qikiqtaruk! But there are so many other ranger duties as well, so we have to learn how to balance everything. I started with surveying the plant plots, we now call the area Phenology Ridge, because there are three transects, one each for arctic willow, mountain avens and cottongrass.  This is where we record plant phenology – the timing of certain life events like the first opening of the leaves and flowers, the first yellowing leaves. I was surprised to find out how long some of this monitoring takes – for example during peak season we go to the cottongrass plots and count all the flowers, as well as measure the width of the tussocks, the ten largest and the ten smallest leaves. This monitoring has been taking place for 18 years, making it one of the longest running phenology records across the Arctic.

We also conduct permafrost measurements, as well as bird surveys and wildlife monitoring, which came to me naturally. We record the population numbers, behaviour and travelling patterns of the different wildlife species present on the island. Qikiqtaruk has the second largest black guillemot colony in the Western Arctic, and we collaborate with Cameron Eckert, Yukon Parks Biologist, to count the eggs, chicks and adults. We also ID the birds that are ringed and recaptured, which gives us an insight into survival rates and population changes of these birds.

Contributions of the Ecological Monitoring Programme

I really enjoy working in close collaboration with the researchers and I especially value knowing why we are collecting the data and what is done with them. My first job on Qikiqtaruk was as a research assistant on the ArcticWOLVES project during the International Polar Year. I know that participating in research and understanding its findings can help motivate people to finish school and become more qualified for jobs. When I go back to my community, people ask me what the researchers are doing on Qikiqtaruk – that’s why I appreciate everything I have learned from our collaboration, because I get to pass on the knowledge.

The island “analog” blog! Team Shrub put together a bulletin board with hard copies of our blog posts for everyone on the island to read this summer.

The first four copies of a Team Shrub booklet – printed on the island at the Signal’s House Publishing Company, stapled together by hand.

A Team Shrub presentation on the island sharing research findings to visitors and other community members.

Sharing the Team Shrub “analog” blog with the community meant carrying the wooden board between the different houses in Pauline Cove and advertising directly to other folks on the island – a much more social approach to social media!

I get updates from the researchers, including Team Shrub and the crew from the Alfred Wegener Institute, through presentations, reports and one to one chats. I also like following Team Shrub and the Permafrost Researchers through social media, such as Facebook, which keeps me up to date even during the winter months when we are all off the island. I think social media really helps with communicating research findings, but people also need to request the information and say what format is most convenient for them – not everyone in the communities use social media that much, so communicating science in different ways is important.

I love the collaboration between the rangers and researchers and I am excited to see how it develops in the future. Perhaps we can do more to connect researchers with people travelling in winter and spring.  Usually researchers cannot be here during that time, so people travelling like me could collect valuable data that would not be available otherwise. It might also be worthwhile to extend the range of the surveys conducted in this region to include things like monitoring berries for example, which are a valuable resource to the Inuvialuit. Qikiqtaruk is definitely the right place for ecological monitoring and I hope we can continue to build on the collaboration between the park rangers and scientists and better involve the people of Aklavik.

Where does a journey begin? For Team Shrub this summer, maybe the journey begins here on the shores of Kluane Lake in the Mountains of the Southern Yukon.
Meet this year’s Team Shrub!
Summer is coming and Team Shrub is back to the Arctic!
To understand how the Arctic is responding as the climate warms rapidly, we need tech to collect data across scales - using boots on the ground, drones and satellites.
Loading Comments...
%d bloggers like this: