What is a theory? Is ecology theory-poor and if yes, why? What are the paths to theory development in ecology? Meta-analyses? Data syntheses? Big data? Stylised facts? These are the questions we set out to discuss during  this week’s lab meeting. We extended an invitation to EdGE (the EdEN discussion Group for Ecology) to get more diverse perspectives, and shared our thoughts on these topics, largely inspired by Dynamic Ecology’s posts about stylised facts in ecology and why meta-analyses in ecology often don’t lead to theoretical insight. We also added in Marquet et al.’s 2014 paper “On Theory in Ecology” into our discussion, bringing forward many thoughts on the different types of theory in ecology, and whether theory in ecology is possible to begin with.

We defined theory as a hierarchical framework of postulates, based on a number of assumptions, and leading to a set of predictions. As we set out to do our research, we can use theory as the base on which you build your hypotheses – and if you find enough support for your hypotheses, in time they might grow into a theory, thus prompting more hypotheses – a self-propelling cycle of gathering empirical evidence and developing theory. But is the cycle broken, with empirical evidence (or its synthesis) becoming an endpoint that prompts little theoretical insight? 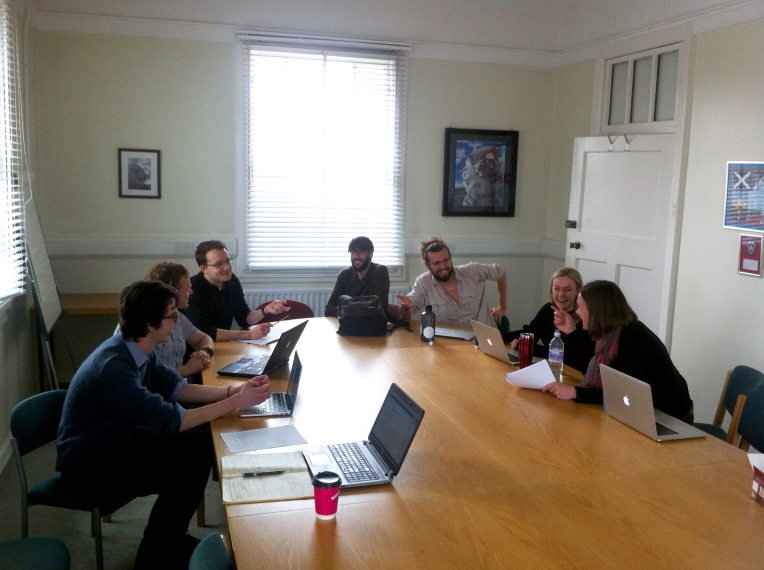 We had a mix of undergraduates, PhD students and PIs in the room, and it was interesting to see how our thoughts varied based on our career stage. We started off with a quick quiz on 1) whether we had heard of the theories covered in the paper before, and 2) whether we had thought deeply about them. Here are the results!

How do we find out about theories in ecology to begin with? It was interesting to note that at least in the ecology curriculum here at the University of Edinburgh, most theories are taught pretty late (3rd and 4th year), and many don’t make it into the curriculum to begin with. How do we decide which theories are worth teaching about? Linking back to Marquet et al. 2014, should we be focusing on teaching the most efficient theories? Should we teach ecological theories in year 1?

From our experience, a lot of ecologists don’t like to think about theory too much – after all, ecology is so complex, are generalisations even possible? Some might say yes! We did, however, wonder what is the role of theory in ecology, if it seldom holds true across organisms, ecosystems, biomes. But then again, theories don’t need to be always right to be useful. Neutral theory, for example, can be thought of as a strawman idea that has spurred many interesting discussions (and research) on how reality differs from the simple pattern described by the theory.

We thought that while theories can be useful, a really strong emphasis on theory can bring you astray – stuck in mathematical equations and too far from the real world. According to the undergraduate participants in our discussion, theories are great for conceptualising ecological processes and thinking about how patterns can be generalised across time and space. We then discussed the difference between meta-analyses and data syntheses, with our group being predominantly being in preference of data syntheses – perhaps they are one of the paths towards the development of more ecological theory. Has that happened in the past? Yes! We used species-area curve relationships  that led to the development of the Island Biogeography theory as an example.

So why isn’t there more ecological theory? We thought of a simple answer – ecologists like to hang out outside. We briefly imagined what first year ecology students would say if when they showed up for the Field Ecology course, where you get to run up and down the Pentland Hills and collect data, we tell them that instead, we will be staying inside, thinking, doing lots of maths, and learning how to develop theory. Most of us went into ecology because we love the natural world and want to 1) learn more about it, and 2) experience it relatively often.  Fieldwork is the highlight of ecology for many of us (though for some of us it’s a tie between fieldwork and coding!), and that, together with all the noise in our data and the many complexities of our field, makes us less likely to engage deeply with theoretical work. Finally, most of us are not exposed to much math, especially at the start of our careers, which again makes it hard to think about how we can turn empirical evidence into theory.

Nevertheless, we are jealous of evolutionary biology, where theories abound! We talked about why that is, reaching the conclusion that theory prompts more theory – because in evolutionary biology there is one major unifying theory, other theories can quickly follow from that – a self-propagating cycle.

Are ecologists too critical? For every theory that tries to make its way, there most probably be someone who says that doesn’t apply to their study organism/system. We thought that we shouldn’t expect theories to always be true, instead we should use them as a stepping stone to build our future work.

Coming back to stylised facts, which may or may not lead to theory, we went around the room and each thought of a stylised fact from our field:

We finished our discussion where we started – at the definition of what stylised facts are, and whether there is one universal definition – thus showing that ecologists do care about generalisation!