So finally we came to the end of our Qikiqtaruk field season; it has been an incredible time for the team, enjoying and enduring many fantastic experiences over the last 62 days.

This is an account of some of the adventures of our last two weeks on the island after we had to say farewell to the Kluane Crew and Jeff who headed back south to Kluane to sort out the last of the data collection at our other field site, or in the case of Jeff, head back to his other life.

Walking down the runway to the plane

A tearful goodbye from Haydn 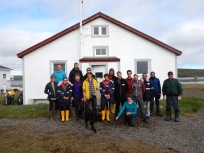 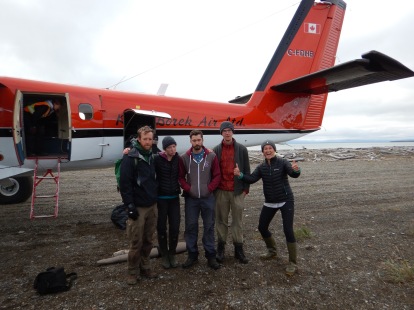 Team Kluane is sad, but El is stoked to be leaving.

Autumn has come to Qikiqtaruk.  The Dryas flowers have gone from twisting filaments to dispersing seeds.  The Eriophorum flowers are no longer fluffy.  The tundra is turning brown. Winter is coming! 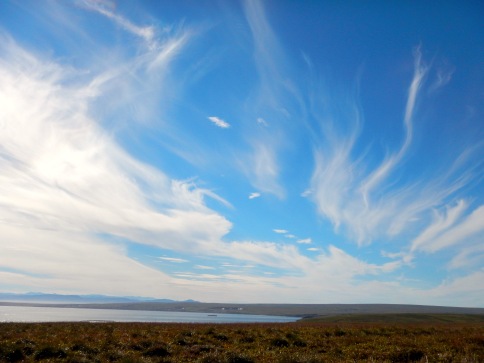 Twisting of filaments of dryas 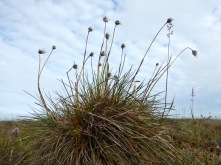 AWI in the distance

Unfortunately, persistent thick fog stopped us from flying the drones in the last week, so our final data collection was limited to on the ground observations. Conducting the last of the phenology records, taking down the air control points in the shrub plot on the floodplain, and doing some quality DGPSing – thanks NERC Geophysical Equipment Facility for the excellent kit!

The yellow circles are potential ground control points in the imagery.

Then we went out and DGPSed them on the ground. 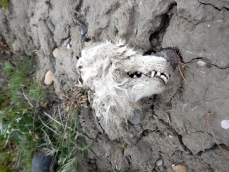 This is the closest we got to seeing an Arctic fox this summer. 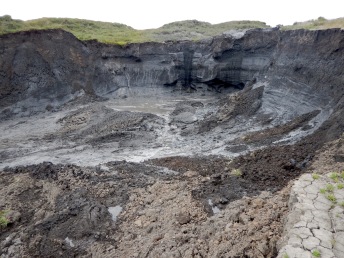 The slumpiest bit of slump A. 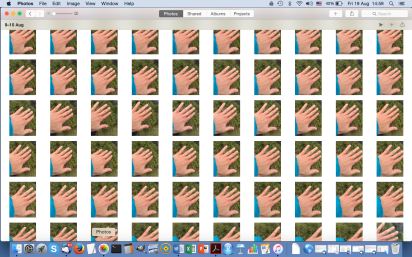 When the fog lifted a bit, we were able to complete some low-level flights with our trainee pilots Santo and Isla with the outreach drone (a 3DR IRIS+), both of whom flew very well most of the time – perhaps soon they will be piloting their own drone teams?

Fog and blue skies over the weather shelters 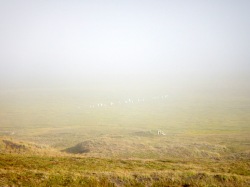 Fog over the floodplain

One of the adventures of the last two weeks was meeting up with the Top-to-Top sailing crew – a family from Switzerland who have been sailing around the world for the past 15 years to teach about climate change and protecting the planet – and going for a spin out on their sailing boat!  Andy even helmed the ship, while the rest of us managed not to get hit by the boom and sails as we were tacking. It was great to make new and unexpected friends in the Arctic.  You can follow their adventures on their blog. 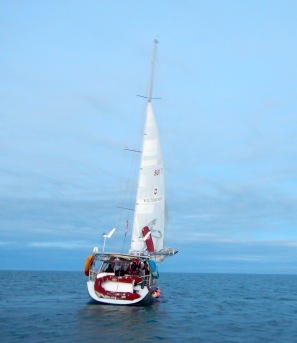 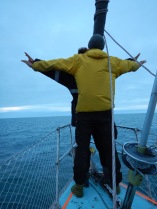 Doing the Titanic front of the boat thing

Piling on to the foredeck

Preparing for the departure kept us busy for our final days – breaking camp, winterising the supplies to be left on the island, discharging >100 Amp hours from the 31 drone batteries to bring them to a safe charge for transport and storage, and last but not least making a commemorative plaque of the time we spent here. The latter was added to the large collection on the wall in the Hunters and Trappers cabin. Our theme this year was a ten pointed antler for each of the nine members of the team plus Mansa the dog.  Each person was matched with one of each of the ten willow species of Qikiqtaruk: Salix pulchra, richardsonii, arctica, glauca, niphoclada, alexensis, reticulata, polaris, phlebophyla, and the newest species to be discovered on the island this summer arctophila. We also left some of the treasures that we found on the island such as Jakob’s discovery of a clay pipe that now resides in the display cases and a potentially 10,000-year-old plus ancient horse jaw bone and hoof?

The 100-year-old clay pipe that Jakob found on the beach from Glasgow, Scotland!

Remnants of ancient horse? that we found on the beach – a hoof and a jaw bone with teeth.

Arts and crafts on the island – making this year’s plaque.

On our final full day on the island, after our flight was cancelled due to the weather, we had the opportunity to join the rangers Sam and Paden on a boat patrol around Qikiqtaruk. We were lucky enough to have some fantastic wildlife viewings, seeing many seals, three musk oxen and two grizzly bears. One of the bears was looking very well fed having dug up some food on the beach and the second was swimming between Advalek Spit and the mainland. Despite much eager searching we didn’t see any more Bowhead whales, although they had been spotted breaching on our route just minutes ahead of us by Cameron from his vantage point high on Collinson Head. This boat ride was reminiscent of a very sunny one the week before with the combined crews of the rangers, AWI and TeamShrub.

Grizzly on the beach

Resting on the beach

The northwest coast of the island.

Bell bluffs on the north side of the island 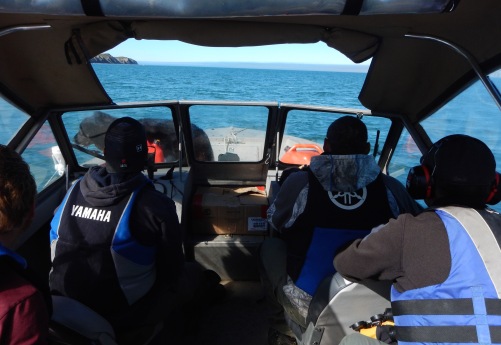 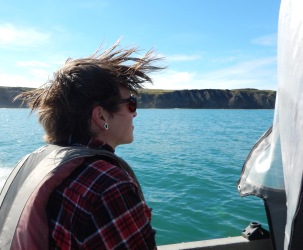 The sea breeze blowing in our hair 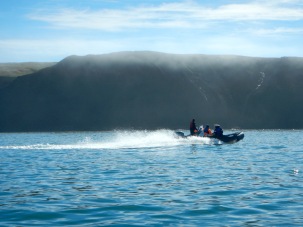 The AWI boat Christine – won by Isla in a poker match

Landing on shore at Avadlek Spit.

Shorebirds on the beach

In the end our pickup was only delayed by 30 hours, but being on standby to move our large pile of equipment out from ‘dry’ storage to the runway at a moment’s notice was a little frustrating. A cut fibre optic cable in Edmonton knocked out phones-communications in the Northwest Territories, Yukon and Nunavut, which made communication with Aklak (the charter company) a little harder, but eventually we received confirmation via email that the flight was on. Our delay did have a silver lining though, in the form of Murray the Musk Ox, who wondered down to Simpson Point for a quick dip in the sea and a casual stroll back through the middle of camp. He came pretty close to us and judging from the smell, he certainly needed the wash!

Murray the muskox going for a swim

Murray the muskox – a wildlife encounter from our 2016 field season on Qikiqtaruk-Herschel Island.

Once the kit was loaded, we bid farewell to our island home and community, and boarded the plane. Even the pair of snowy owls came down to see us off.  The flight back was low under the cloud, with the team reflecting on what we’d achieved over the last two months. Back in Inuvik we were surprised to be greeted by so many folks: Richard Gordon, head park ranger at Yukon Parks, Rob Strong, the North-Wright Airways pilot that we saw so much of while on Qikiqtaruk and who even came out to see us flying the drones in the field, Jay and Sarah from Parks Canada, John from dispatch at Aklak Air, John from Driving Force delivering our truck like a hero! Time for a quick 18-hour turnaround, packing kit away into storage in Inuvik, preparing various shipments for dispatch, hanging out with our fellow Northern researcher friends at the ARI row houses and then a few hours’ sleep before heading further south…

By Andy and Isla 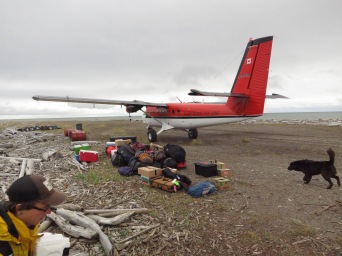 Twin Otter arriving on the beach airstrip to pick us up.

Our fairwell jump photo with the AWI crew and rangers. 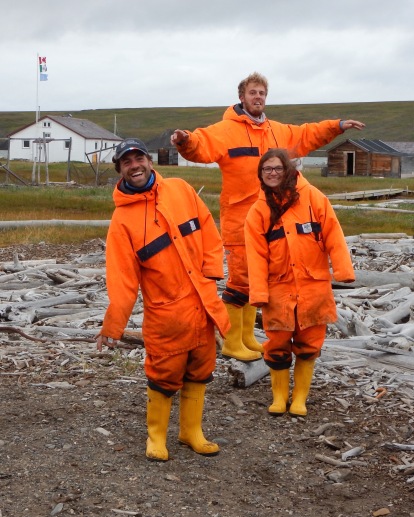 A last chance to catch us out with hijinks and such.