After the flood waters subsided a bit and the winds died down, Team Shrub was reunited at last as our remaining members arrived on a helicopter and two float planes!  It was an epic way to converge on our Arctic Fieldsite Qikiqtaruk.

Almost as soon as the rest of the team landed the science planning began.  We have a long list of data collection goals, but so far we are ahead of schedule!  We are still working as two teams: Team Drone and Team Kluane, but now our mornings and evenings are shared and the enthusiasm from our new arrivals has rubbed off on the rest of us, and their efficient productivity and good luck.

Since the arrival of the rest of TS, our drone luck has very much turned for the better.  We have had two successful days of drone data collection – double drone days with a hexacopter and a fixed wing in the air!  And we are going for a triple drone day today, trying to fly both of the hexacopters and the fixed wing – here is hoping our luck continues.

We can’t send you the photos through our sat phone connection to the outer world, but imagine multiple GBs of imagery of really awesome green tundra with ice wedges, ponds, patches of bare ground, shrubs and even retrogressive thaw slumps.  Once it is all stitched together in 3D models, it is going to look so cool and produce some really awesome scientific findings as well – we hope!

Team Kluane has been busting out trait measurements, collecting samples for the common garden, germinating willow seedlings and collecting tea bags.  Their major scientific discovery so far is that lemmings sometimes eat tea bags buried in the tundra, but there are more discoveries to come as their data collection continues.

So it is great to be reunited as one TeamShrub again eating our meals around the big table in trappers.  How lucky I am to have all of these amazing young scientists working with me and how cool it is to be past some of our previous fieldwork frustrations of this summer to collecting data again at a great rate!

Exploding high five TeamShrub (both the field crew and our members elsewhere in the world!)

P.S. We did our first exploding high five of the summer together on Collinson Head after the first successful flight of the fixed wings and the first day of getting Shrubcopter airborne again.  It was an epic sunny exploding high five with all of the 9 of us surrounded by the tundra and Arctic ocean with icebergs floating around in the distance.  Next time we will get it filmed with the Solo in 4K!!! 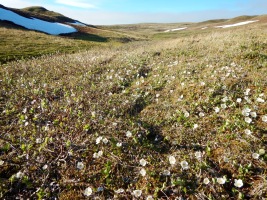 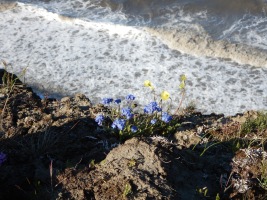